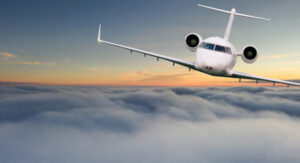 Argus found during the first seven days of June, Parte 135 flights reached 68% de 2019 levels while fractional flying was at 65%.

Parte 135 represents on-demand charters and jet card flights. Fractional activity was driven by NetJets and Flexjet, two of the market’s largest players, although their totals also include flights they operate for jet card customers in addition to share owners.

A poll during a recent webinar by Aviation Week found 55% of respondents believe private jets will get back to pre-crisis activity within a year, e mais de 80% think that it will take less than two years.

Como um exemplo, a 336 mile flight from Miami to Jacksonville takes about 47 minutes on a light jet. American Airlines blocks the same trip at around 80 minutos, accounting for various delays.

Contudo, there is now only one daily nonstop per day in each direction between the two Florida cities. Prior to the coronavirus pandemic, there were up to 16 daily flights on the route.

Flights by charter operators achieved 59% of activity levels on a year-over-year basis. During the period there were 13,742 departures, down from 23,453 dentro 2019.

On Memorial Day Saturday, Parte 135 flights ended up at 71% of last year’s level while the fractional operators were at 68% de 2019 activity. During those same days airline passenger count was at 12%.

Jet Cards, which often require a purchase of at least 25 horas, are now commonly being sold with a requirement of buying only 10 hours of travel up front. Ao mesmo tempo, more companies are launching pay-as-you-go memberships, where you pay to join, but then don’t have to deposit money, instead paying with each flight.

atualmente, demand is so strong, it’s not clear lowering the bar is even necessary.

Sentient, which has kept its entry-point at 25 horas, reports half of card hours sold in April and May were to new customers. For NetJets, which also requires a purchase of 25 horas, new first-time customers doubled its typical May haul and made the month its best since December 2007.