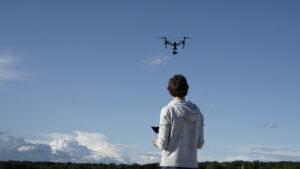 En Dakota del Norte, it’s possible for some high school students to graduate with both their private pilot certificate and a Part 107 remote (drone) pilot certificate. With robust aviation programs in a number of high schools across the state, students are receiving training that could lead directly to careers in aviation or aerospace – including the field of unmanned aviation systems (UAS).

“We’ve got seven districts with aviation career academies, and they’ve all integrated UAS into their programs,” said Mike McHugh, aviation education coordinator at the North Dakota Aeronautics Commission. “Each program is unique, and UAS is a great way to make the academies more accessible and attractive to more students, including agriculture students who understand the importance of drones in their field, and even those who like video games.”

North Dakota is a test site for the Northern Plains Unmanned Aircraft System, and enthusiasm for drones is palpable throughout the state with uses in agriculture, wind tower and pipeline inspection, y mucho más. UAS career possibilities continue to grow – and the state’s aviation education programs are keeping pace. North Dakota is also fairly unique in that it has state standards for its high school aviation programs.

A key benefit of the UAS curriculum is that the students don’t have to be transported to the airport, with the drones accessible at the high school. Most of the aviation programs also have drone simulators right in their classrooms.

Brad Stangeland, aviation technology instructor for Bismarck Public Schools, University of Jamestown and Jamestown High School, is proud that one of his students, who got his Part 107 certificate in high school, is about to start a new drone job in Fargo. “UAS is definitely increasing interest in our program,” noted Stangeland. “Nearly half of our students are focusing on drones. We are trying to get the kids prepared for an aviation or UAS career.”

The Bismarck aviation academy, which serves the three high schools in the district, averages about 50-60 students a year. The program also has its own Cessna 150, and some students have graduated with their private pilot certificate.

In Williston, Thomas Sando, aviation instructor at the local high school, is integrating Unmanned Safety Institute (USI) curriculum for the first time this school year after months of preparation and a $42,000 grant from the ND Aeronautics Commission.

“My hope is to attract kids who didn’t think they could or even wanted to be a pilot,” said Sando.