Industry and Regulators Confront the Science of Engine Icing 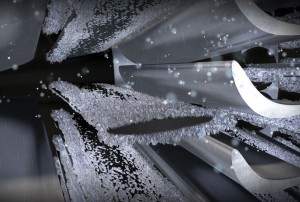 Ice crystals can penetrate far into an engine and cause serious icing issues. Photo: NASA

Researchers are gradually coming to understand the physics of in-flight engine icing due to ice crystals. In response to this enhanced knowledge of the subject, civil aviation authorities, such as the European Aviation Safety Agency (EASA) and the U.S. Federal Aviation Administration (FAA), are considering more stringent certification requirements. Meanwhile, manufacturers are factoring in icing protection in their designs but are wary of what they would view as excessively strict rules.

Ice crystals (50 to 200 microns in size) can cause icing in the low-pressure compressor, intermediate casing and even the first stages of the high-pressure compressor. It is not the only icing phenomenon that can affect an engine but is the one that has the deepest impact on the turbomachinery of an engine. It can cause various damages and malfunctions, up to flameout. More than 100 ice crystal and mixed-phase engine events were recorded between 1988 and 2003.

During a conference the EASA organized last October, Rolls-Royce (Booth N23) and Snecma (Booth G16) shared data on in-service icing events in the past decade. It appeared ice crystal encounters happen usually at high altitude and very low ambient temperature. Ice crystals can be found near a convective storm, particularly a mesoscale convective system, which is a storm complex measuring up to hundreds of miles horizontally.

According to records kept by engine makers Rolls-Royce and Snecma, events seem to concentrate in the Pacific Rim region. Morgan Balland and Geoff Jones, icing specialists at Snecma and Rolls-Royce, respectively, suggested the issue could become more serious in the near future. “Traffic is increasing in Asia and tropical climate is a good place for ice crystal formation,” they warned in a joint presentation.

The process in which ice crystals can create in-engine icing in flight are now understood. Ice crystals bounce off freezing surfaces near the front of the engine and enter the core, explained Richard Lewis, Airbus certification manager for icing, speaking on behalf of the international coordinating council of aerospace industries associations (ICCAIA).