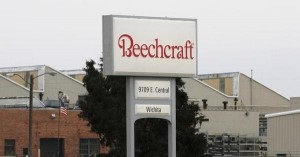 Textron has closed its acquisition of Beechcraft Corp., and will merge Cessna Aircraft and Beechcraft to form a new segment called Textron Aviation, the company announced Friday.

“The attractiveness of the merger was driven by the fact that the two companies have very complementary product lines in a market we’ve both been in for a very long time,” Scott Donnelly, Textron CEO, said in an interview with The Eagle.

The merger gives Textron a broad range of products and an extensive international service network, he said. Beechcraft and Cessna will consolidate and operate as one business, he said.

There will be job cuts as the two companies consolidate support operations in areas such as human resources, finance, accounting, purchasing and other back office functions, Donnelly said. He declined to estimate how many jobs would be lost in the consolidation.

“We have to go through that process,” Donnelly said. “We want to do these things as quickly as we can,” he said, adding that he can appreciate the uncertainty it brings to the workforce.