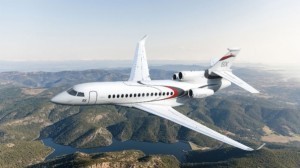 Dassault has unveiled the newest member of its Falcon Jet family. And while the Model 8X is essentially an iteration of the three-engine model one digit removed, its additional cabin space and increased fuel load make it the French planemaker’s most comfortable long-ranger.

Derived from the Falcon 7X, the new model features a 42.6 ft (13 m)-long cabin, as compared to the 39.1 ft (11.9 m)-long passenger section of the earlier model. Significantly, an increase in fuel capacity combined with engine tweaks and aerodynamic refinements have upped range from the 7X’s 5,950 nm to 6,450 nm for the 8X, and that’s with three crewmembers, eight passengers, a Mach .80 cruise and NBAA IFR reserves upon arrival.

The range boost means the 8X can carry that same contingent from New York to Dubai, Sao Paulo to Moscow, Paris to Tokyo, and Beijing to London or New York. Like previous Falcons, the 8X will be able to meet the demanding approach and takeoff restrictions for operating into London City Airport.

The introduction, made at the European Business Aviation Convention and Exhibition (EBACE) in Geneva in May, follows on the heels of the twin jet Falcon 5X’s introduction at the NBAA annual convention in Las Vegas last Fall.

Eric Trappier, chairman and CEO of Dassault Aviation, said this was “the first time in our history” the company has launched two new Falcon models in so short a timeframe. Nevertheless, he expressed confidence in the success of both, adding, “I’m quite sure the market is going to be very enthusiastic about the 8X.”