Exit: The Brightest Side of Private Flying 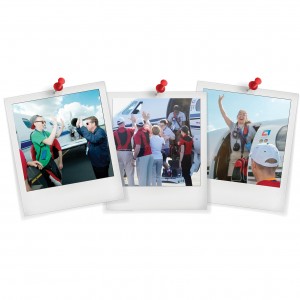 “This is business aviation at its best—so many people giving their time and talents to such a worthy cause.” —Ed Bolen, president and CEO of the NBAA. (Photos: Mark Phelps)

“Whaaaaat-up, New Jersey?!” shouted Ryan Gray, a golfer from Michigan, as he walked across the tarmac toward a throng of raucous fans. Arriving at Trenton-Mercer Airport to compete in the 2014 Special Olympics Games, Gray waved and high-fived like the celebrity he is. Accordingly, his ride was nothing less than a Cessna Citation Sovereign private jet, all expenses donated by the corporation that owns and operates it.

Founded in 1968 by Eunice Kennedy Shriver, the Special Olympics is the world’s largest sports competition for children and adults with intellectual disabilities. More than 4.2 million athletes from 170 countries participate. For the 2014 U.S. national games, Cessna Citations and—for the first time—Beechcraft King Air turboprops flew some 700 athletes, coaches and family members from all over the country as part of the Citation Special Olympics Airlift, at times touching down at Trenton every 90 seconds. Gray’s flight, which also carried eight fellow Michiganders to the games, was one of 105 arriving in New Jersey on June 14. This year’s operation was the seventh such airlift.

Organized by Cessna and its parent company Textron Aviation, the airlift brings together aircraft owners and operators to transport the athletes in a high-rolling style they’ll never forget. The pride on their faces as they disembark in front of the waiting crowd is a priceless reward for those who help make the flights possible.

Besides the aircraft owners and crews, hundreds of other volunteers worked to support the 2014 airlift. The FBO at Trenton-Mercer Airport, Ronson Aviation, cleared the parking ramp and hangars, also arranging for extra tugs, tow bars and fuel trucks. FAA air traffic controllers began their preparations 18 months before the event, when they started laying out arrival routes for the incoming flotilla of jets. Local businesses provided hospitality tents, food, water and coffee. Army and Air Force National Guard units drove the trucks that delivered athletes’ luggage to dormitories near the sites of the games.

Some of us in the welcoming crowd played the humble role of baggage handlers, emptying the jets’ cargo holds and schlepping the athletes’ duffels across the ramp in golf carts. This was my third time slinging bags at one of the airlifts, and it never fails to keep my spirits glowing for weeks afterward.