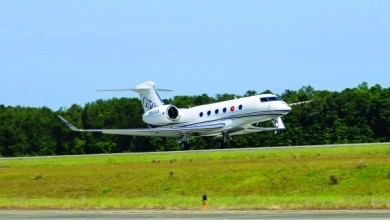 The 2-hr., 16-min. mission began and ended in Savannah, Georgia. It was flown by test pilots Scott Martin and Kevin Claff at the controls, assisted by Bill Osborne. During the flight, the crew evaluated handling qualities, flew the aircraft in various takeoff and landing configurations, including making a simulated approach and go-around, and ran through systems checks using the new Symmetry touch-screen cockpit controls. The aircraft flew as fast as 194 kt and as high as 15,000 ft.

The successful first flight comes six months after the aircraft initially rolled out under its own power in Savannah. It is a key milestone in the flight-test program, a confirmation to customers that development is on schedule.

In preparation for the first flight, Gulfstream engineers completed more than 34,000 hr. of tests in its G500 ground labs. They also completed ground vibration and structural load limit tests. All vendors validated safety-of-flight status for onboard systems. Five aircraft will participate in the certification campaign, including one with a full interior. A full-motion flight simulator is now operational in Savannah.

Development of Gulfstream G600, a longer-cabin and longer-range variant of G500, remains on track, with assembly of the first aircraft proceeding in Savannah. Both aircraft will boast 4,850 ft. maximum cabin altitudes at FL 510. At typical cruise altitudes, cabin altitude will be 3,500 ft. to 4,500 ft.

This article originally posted on Aviationweek.com.