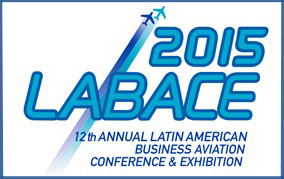 With LABACE 2015 just around the corner for our Latin-American neighbors, we are excited to bring you a preview of this year’s event!

LABACE comes once again to Conghonas Airport in São Paulo next month (August 11-13), bringing with it hopes that Latin American business aviation can build a modern fleet and infrastructure.

It will be the 12th time the LABACE conference and exhibition has been held, and with the past three the feeling has been growing that the event has outgrown its home airport, not least because of encroaching low-cost carriers. In addition, a hangar collapse last year hardly instilled confidence in the aging buildings at the site. Suggestions that the event should move to Campo de Marte airfield, in the north of the city and closer to the financial district, seem to have fallen on deaf ears again despite the availability of a far more modern exhibition center close to that location. Whether LABACE has outgrown Congonhas is certain to be a question at this year’s event.

In recent years LABACE has been a distinctly Brazilian affair, being run by ABAG (the Brazilian General Aviation Association). Even the keynote speeches have focused on Brazil rather than the wider South and Central American region despite the fact that some countries, such as Mexico, have thriving bizav sectors. Visitors to the relatively small show will be looking for something more this time around, with perhaps a broader array of international visitors.

When Eduardo Marson Ferreira, chairman of ABAG and president of Helibras, opened his third LABACE in August 2014 he said there were 70 aircraft at the event and some 14,000 visitors were expected. This year’s show is shaping up to be about the same size.

While some traditional participants have dropped out or reduced their exhibit space as a result of the current economic crisis, he said there will be new participants, both Brazilian and international. They have all asked that their participation be kept confidential for present. “It’s up to them to announce,” said Nogueira.

One topic on the agenda at this year’s event is likely to be safety. During last year’s show, presidential contender Eduardo Campos was killed when his business jet crashed shortly after takeoff from the coastal town of Santos, near São Paulo. Another high-profile accident involved the heirs to the country’s largest distillery, the governor’s son and husband-and-wife TV personalities.

Access to airports has been a big issue for business aviation in past years, so attendees will be looking for evidence of progress in this regard. LABACE is likely to see exhibitors showing off their new business aviation airport plans again, some of which will be incomplete while others remain pipedreams. Brazil’s regional development plan calls for 270 new regional airports to keep up with airline demand, but business aviation hopes to benefit also.