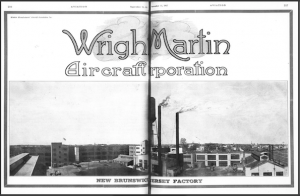 Check out this awesome insight into the History of General Aviation!

Serendipity can lead you to amazing discoveries in Aviation Week’s 100-Year Archive. One of our interns who was checking the 400,000 pages scanned into the archive asked me a question about an ad for the Wright-Martin Aircraft Corp. in an issue from 1917.

The two-page spread ad featured a photo of Wright-Martin’s New Brunswick, N.J., aircraft factory. For nearly eight years in the 1990s, I’d lived in that city, home to Rutgers University and Johnson & Johnson.

I could tell the approximate location from the Northeast Corridor railroad tracks in the lower right corner of the photo (above). But until that day, I’d never had a hint that the facility turned out military aircraft engines during World War I.

The buildings looked familiar, but the old city has many factory buildings with a similar appearance.

A call to the New Brunswick Free Public Library helped fill in the holes. After the war ended, government aircraft orders to Wright-Martin fell sharply, and the company could no longer justify the cavernous factory on Jersey Avenue. By 1922, International Motors had taken over the facility. Later, Simplex Automobiles and Mack Trucks occupied the facility, library director Bob Belvin said in an email.