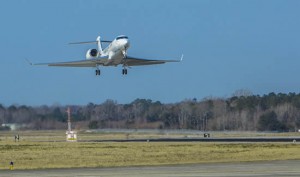 Gulfstream has confirmed that its fourth G500 test aircraft, T4, has completed its first flight and officially joined the G500 flight-test program.

The aircraft climbed to a maximum altitude of 51,000 feet/15,545 meters and reached a maximum airspeed of 340 KCAS/Mach 0.925. During the 3-hour and 17-minute flight, the crew exercised all primary flight control systems, performed functional checks of air data and cabin pressurization systems and completed a series of engine performance measures. The aircraft landed back in Savannah at 1:04 p.m. local time.

“The first flight of T4 speaks to the growing maturity of the G500 flight-test program and the significant development we completed before we even launched flight test in May 2015,” said Mark Burns, president, Gulfstream. “To have four first flights and more than 580 flight hours in just nine months is quite an accomplishment.”

T4’s first flight represents a milestone in the aircraft’s development program. For the first time, Gulfstream has integrated a team of Product Support maintenance technicians with the Flight Test team to follow the aircraft through manufacturing and flight testing.

This article originally posted on BlueSkyNews.Aero.