Solar and Electric Aviation Could be on the Horizon 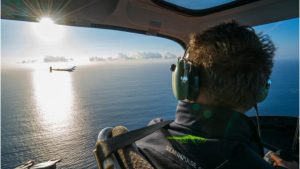 Solar Impulse is altering the way we fly, as we speak, and the next decade could be bringing with it monumental change to the aviation industry.

In the heart of aviation’s birthplace, the visionary behind the history-making solar airplane that stopped in Dayton on an around-the-word trek said electric planes will be in commercial use within a decade.

“My wish is a plane like Solar Impulse can really show the way,” said Bertrand Piccard, who first thought about developing a plane that flew without fuel in 1999. “The planes will not be solar very fast, but they can all be electric. I bet in 10 years time, there will be electric airplanes transporting at least 50 people for short or medium haul flights.”

Piccard, who shares piloting the single-seat plane with fellow Swiss aviator Andre Borschberg, said electric planes will be able to land at urban airports day or night with little noise and no pollution while providing jobs and increasing the profit of airlines.

“You can plug into the grid,” Piccard said. “The efficiency of such an electric engine is so much better that it starts now to compensate for the weight of the batteries.”

Piccard, whose grandfather developed the pressurized aircraft cabin, said being in the hometown of the Wright brothers is a reminder that success often comes after adversity, but dedication to an idea, hard work and perseverance can pay off.

“You know what I love the most about the Wright brothers? It’s not the fact that they were the first. It’s the fact that they continued to try despite the setbacks, the pressures and the people who said it was impossible,” Piccard said. “This is admirable.”

The Solar Impulse 2 with a wingspan greater than a 747 jumbo jet yet weighing just 5,100 pounds — about as much as a family car — is expected to depart Dayton International Airport about 5:45 a.m. Tuesday. The plane is scheduled to land next at Lehigh Valley International Airport in Pennsylvania. From there, it flies to New York City followed by a days-long Atlantic Ocean crossing, which will be piloted by Piccard.

Brightly-lighted against the night sky, the plane touched down in Dayton about 10 p.m. Saturday night. Since then, it’s been housed in an inflatable hangar at the airport where it’s attended to by about 20 ground crew members. Another 30 are traveling in support of the mission, said Solar Impulse spokeswoman Emily Geer.

Pilot Andre Borschberg piloted Solar Impulse 2 into Dayton from Tulsa, Okla., the 12th leg of the the trek about two-thirds completed. The plane took off in March 2015 from Abu Dhabi and Piccard expects to touch down there to complete the journey in July.

This article was originally posted on AviationPros.com.