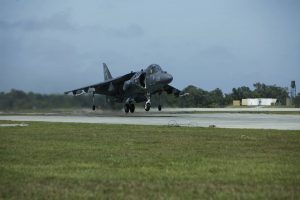 In the course of 75 years, fields and swamps along the Neuse River in Eastern North Carolina became the largest Marine Corps Air Station in the United States.

And as Cherry Point celebrates its 75th anniversary, the future may just be as bright as its historic past.

“I look forward to support for this base and for the Marines here for another 75 years,” said Col. Chris Pappas III, who last month relinquished command of the air station.

In a recent interview, Pappas made clear why Cherry Point has a bright future.

“Cherry point right now is at a strategic transition point,” he said. “This base was born out of World War II.”

Today marks the 75th anniversary of Cherry Point. It was on Aug. 18, 1941, that the commandant of the Marine Corps, Lt. Gen. Thomas Holcomb, wrote a letter establishing “Air Facilities under Development at Cherry Point.” It was also on that date that Lt. Thomas J. Cushman, the base’s first commanding officer, reported for duty with four enlisted Marines.

With war waging in Europe in early 1941 — and months before the Japanese bombed Pearl Harbor — the Marine Corps was already planning an unprecedented expansion and needed a new, central location to train. A new aircraft facility was part of the plan.

The specifications required “an area at least 10 miles square, unobstructed by public roads, railroads, industries or habitations which would interfere with the firing of artillery weapons up to 6-inch, or with aircraft and anti-aircraft gunnery.” Furthermore, “a real necessity exits for a training area for the Fleet Marine Force units on the Atlantic coast.”

Soon it was apparent that eastern North Carolina was the most suitable geographic location for the air station and an even larger Marine Camp that would become Camp Lejeune.

Initially, military officials pointed to an area called Wilkinson Point and its vast undeveloped territory in rural Pamlico County as the best choice for a base, but the Marine Corps changed its mind and decided to put the station on the other side of the Neuse River between Slocum Creek and Hancock Creek in Craven County because of the presence of a railroad line that could bring in the enormous amount of building materials required for the endeavor.

This article originally posted on AviationNorthCarolina.com.