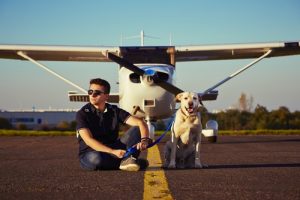 Humans aren’t the only ones who benefit from business aviation’s capabilities, as one operator recently stepped in to fly 34 stray dogs, rescued from Puerto Rico, to “forever homes” in the U.S.

“Although we’ve traditionally used commercial airlines to fly the dogs to the states, it’s increasingly difficult to rely on that thanks to schedule cuts and equipment downsizing,” explained Chrissy Beckles, founder of The Sato Project.

Not only are fewer flights available out of San Juan, Beckles said, but the airlines now fly smaller aircraft unable to accommodate many animals, especially in summer heat.

PBJ charter broker Scott Lebovitz said there were particular challenges with this trip, compared to his company’s typical human clientele. That included arranging a brief fuel stop in temperatures that would still be comfortable to the dogs, and arranging the kennels (“like a giant game of Tetris”) so that each animal’s safety and comfort would be preserved onboard the aircraft.

Since 2011, The Sato Project has rescued and rehabilitated more than 1,500 dogs from the infamous “Dead Dog Beach” area in Puerto Rico. “We fight for these dogs,” said Beckles. “It is a mission of love to find homes for these precious doggies.”