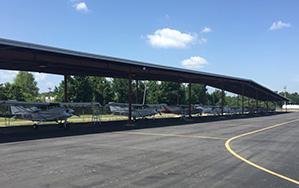 Among the first things Michelle Anthony noticed upon becoming manager of Dexter B. Florence Memorial Field (ADF) near Arkadelphia, AR this year, was that the grass needed mowing. The city assumed ownership of the single-runway airfield in June following years of leasing it to a private operator. “The airport really hadn’t been maintained,” she explained. “Although it had always been an important part of the community, no one really knew how best to utilize it.” To help bolster support for the airport among Arkadelphia officials, Anthony ordered No Plane No Gain advocacy resources, such as the Business Leaders on Business Aviation booklet, affirming the industry’s importance for some of the world’s most dynamic companies.

Home to a busy university flight school, ADF also supports several local businesses, including pharmaceuticals provider AllCare, and a recently-announced paper mill expected to add 250 jobs in the city of 10,000 residents. “We really have a little bit of everything come through here,” Anthony said. “The city is eager to support us, but they don’t know what they don’t know.”

Anthony also ordered the popular No Plane No Gain lapel pins for the city manager and other officials. “I hope wearing these pins will remind them that our airport, and other airports, are the diamonds and doors to our communities,” she said. ADF recently earned a grant to replace its 6,000-gallon Jet-A tank. Anthony hopes to eventually lengthen 5,000-ft. Runway 4/22 to accommodate larger aircraft, and – once funding is approved – build a new terminal. As for the grass? After being told that budget issues would prevent mowing until later in the summer, Anthony took her concerns to the local sheriff. The next day, an inmate work crew arrived to mow around the airport and perform other basic maintenance. “I may not be able to pull many strings, but I can always ask for help!” she said.