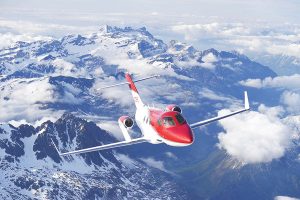 The HondaJet has set two speed records against jets in its class. Greensboro-based Honda Aircraft Co. said it set records from Teterboro, N.J., to Fort Lauderdale, Fla., and Boston to Palm Beach, Fla. The U.S. National Aeronautic Association certified the records, according to a Honda news release.

In setting the record between New Jersey and Florida, the HondaJet flew from Teterboro Airport at 2:15 p.m. on April 9 and landed at Fort Lauderdale Executive Airport at 4:06 p.m. Despite average headwinds of nearly 70 mph, the 960 nautical-mile flight took 2 hours and 51 minutes at a cruising altitude of 43,000 feet. Factoring the considerable headwind of 60 knots and high temperatures, the HondaJet achieved an average true air speed of 396 knots (456 mph) and maximum ground speed of 414 knots (478 mph) for this flight.

For the Boston to Palm Beach record, the HondaJet departed New Bedford Regional Airport at 7:18 a.m. on July 19, 2016, and landed at Palm Beach International Airport at 9:16 a.m. The 1,060-nautical-mile flight took 2 hours and 58 minutes. Factoring average 30 knot headwind, the HondaJet achieved an average true air speed of 385 knots and a maximum ground speed of 422 knots (486 mph). The HondaJet is the first aircraft in its class to officially achieve the Boston to Palm Beach record.

HondaJet competes in a class of four commercially available “very light jets,” or jets that weigh less than 10,000 pounds. Other competitors in the very light jet category are the Embraer Phenom 100, Citation M2 and Citation Mustang, according to Honda Aircraft spokeswoman Kristy Kennedy. The company received type certification from the Federal Aviation Administration on Dec. 8, 2015, and delivered the first HondaJet on Dec. 23. The jet is manufactured at the company’s world headquarters at Piedmont Triad International Airport.

In late 2015, Honda employed about 1,700 people and made about four of the jets a month. The HondaJet can seat up to seven people, including one or two pilots. Honda Aircraft has dealerships in North America, South America and Europe, and it has said for years that it has orders for more than 100 of the $4.5 million aircraft.