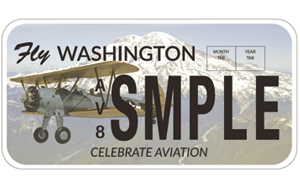 A license plate recognizing the value of aviation, including business aviation, could soon be a new option for Washington state vehicle owners.

“NBAA encourages our members in Washington to support this initiative, which not only raises awareness of the state aviation system, but would also provide additional funding for the infrastructure of vital public-use airports in the state,” said Kristi Ivey, NBAA’s Northwest regional representative. “Aviation in the state of Washington has strengthened over the past few years because of the collaboration within the Washington State Aviation Alliance, and the Washington State Department of Transportation‘s Aviation Division.”

The anticipated one-time cost for the aviation plate would be $40. Of that fee, $12 would cover vehicle licensing fees, and the remaining $28 would support aviation-specific initiatives such as: