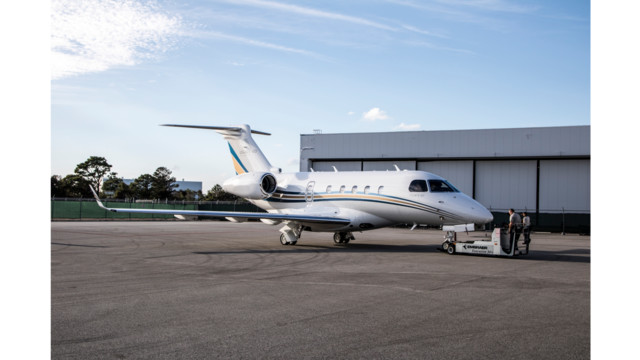 Check out this exciting update from Embraer, regarding the first Legacy 450 business jet delivery!

Embraer has delivered the first Legacy 450 mid-light business jet assembled at its Melbourne plant. The aircraft was delivered to an undisclosed U.S. customer, who currently owns a Phenom 300 light jet.

“We are pleased to meet customers’ changing needs throughout their journey with a broad product portfolio. The choice of the Legacy 450 by a Phenom 300 customer testifies to the best-in-class design of each of our aircraft,” said Marco Tulio Pellegrini, President & CEO, Embraer Executive Jets. “In its category, the Legacy 450 delivers a superior customer experience with unparalleled comfort and performance as well as the most favorable economics.”

The assembly of this aircraft began with the inauguration of the Melbourne assembly plant expansion, in June of this year. The second Legacy 450 is already on the assembly line, and its delivery is scheduled for the first quarter of 2017.

The larger Legacy 500 midsize jet will begin to be assembled in Melbourne, early in 2017, soon after the arrival of its fuselage from Embraer’s plant, in Botucatu, Brazil, and its wings from Évora, Portugal, home to Embraer’s materials excellence center. The Legacy 450 and Legacy 500 are also produced in Brazil, at Embraer’s plant in São José dos Campos.