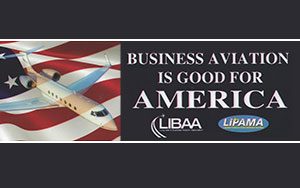 Echoing imagery and a central message of the No Plane No Gain advocacy campaign – jointly sponsored by the National Business Aviation Association and the General Aviation Manufacturers Association – the bumper sticker depicts a business aviation plane on an American flag background and states, “Business Aviation is Good for America.”

The groups’ joint goal is to demonstrate the value of business aviation to New York’s Long Island, which is home to one commercial service airport – Long Island MacArthur Airport – and several general aviation airports and heliports.

“General aviation airports throughout the Island open up our communities to various commerce, and are beneficial to companies with headquarters located near these airports,” said Gene Portela, president and CEO of Corporate Service Supply & Manufacturing, and an LIBAA board member.

A 2013 PricewaterhouseCoopers economic impact study found New York to be one of the top 10 states ranked by total number of jobs attributable to general aviation, with 37,800 jobs attributed to general aviation. General aviation adds $4.5 billion to the state’s gross domestic product, according to the report. LIBAA and LIPAMA often work together to advocate for business aviation, and the associations have also worked with NBAA on various advocacy initiatives over the years.

“The two organizations get together quite frequently to support each other, hold joint meetings and events, to not only advance the causes of aviation locally on Long Island, but to promote business aviation and its intrinsic values to American industry nationwide,” said Portela.