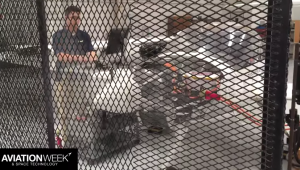 Graduate students perform a test-run of Embry-Riddle Aeronautical University’s E-Spirit of St. Louis, read more below about the new Hybrid.

A Florida aviation college is leading the fusion of fossil-fuel engines with electric propulsion. Embry-Riddle Aeronautical University researchers have become the nucleus around which a new nine-seat hybrid electric turboprop aircraft could be built in the near future. The effort is being run out of the college’s Eagle Flight Research Center, at its Daytona Beach, Florida, campus, and is headed by aerospace professor and researcher Pat Anderson. In 2016, he formed a hybrid-electric research consortium to study what hybrid electric power could do for a next-generation.

Graduate students perform a test-run of Embry-Riddle Aeronautical University’s E-Spirit of St. Louis all-electric two-seater. The modified Diamond HK36, planned for first flight in May coincident with the 90th anniversary of Charles Lindbergh’s solo flight across the Atlantic Ocean, has a 150 hp Yasa liquid cooled automotive electric engine and is designed for an endurance of 1 hr and 45 min using Lithium ion battery packs and custom-designed cooling systems.

This article was originally posted on Aviationweek.com.