Gulfstream G500 Plans For Entry Into Service This Year 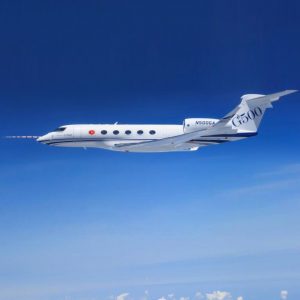 Gulfstream Aerospace’s new G500 is on track to for certification and entry into service by year-end!

Gulfstream Aerospace remains on pace for G500 certification and delivery this year with five test aircraft now flying, including its fully outfitted testbed. Those aircraft have collectively accumulated 2,600 hours in more than 600 flights, Gulfstream said.

“Development testing is complete; company testing is well under way, and FAA certification has started, putting us right on track for certification and customer deliveries later this year,” said Gulfstream president Mark Burns. “The maturity, discipline and rigor of our program give us great confidence as we look forward to our first delivery.”

The latest update follows the announcement last fall that the company was accelerating the time frame of the G500 from original plans for entry into service in 2018.

One of the more recent milestones involved a flight with members of Gulfstream’s Advanced Technology Customer Advisory Team (ATCAT) aboard the fully outfitted production aircraft. “The feedback during and after these flights was extremely positive,” Burns said, noting that the customers highlighted the added flexibility of the cabin, the comfort of newly designed seats and enhanced satellite communications.

“The flight was a ‘career’ moment for me,” said Peter Zeeb, who has been involved in the ATCAT program for six years and is director of maintenance for Oregon-based Ochoco Administrative Services, which operates three Gulfstream aircraft. The outfitted G500 has flown more than 180 hours since its first flight on August 5.