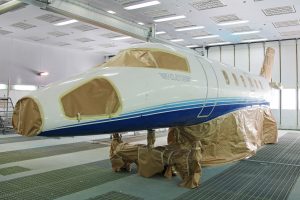 Pilatus Aircraft recently released that production of the PC-24 twinjet has officially begun at the company’s headquarters in Switzerland.

Series production of the PC-24 twinjet is now under way at Pilatus Aircraft’s headquarters in Stans, Switzerland, as the company prepares to deliver the first customer aircraft in the fourth quarter following certification. The production status of the first few PC-24s is already “well advanced,” the company said, with the first production airplane already painted in its final livery. In January, PlaneSense was revealed as the launch customer for the new twinjet.

Meanwhile, the third PC-24 prototype (P03), which also represents the series standard, is being publicly unveiled this week at EBACE. P03, which has been flying since March 6, has a “shimmering pearlescent” livery and executive “Zermatt” interior. On display next to the PC-24 is a full-size mock-up with the “Vail” style interior with a “flexible” six-plus-two seating configuration. A total of six interior color themes have been created in partnership with BMW Designworks and are named after well-known ski resorts.

With the addition of P03 in March, the PC-24 flight-test fleet is now complete. To date, the three prototypes have logged 950 flights and 1,525 hours. Further certification flights are currently in progress, Pilatus said, with PC-24 certification planned for the fourth quarter.