Check out this article about the first certified flight of an airplane in the United States made on Independence Day! 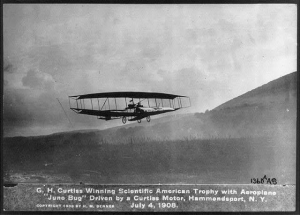 History was made on July 4, 1908, the date of the first pre-announced, publicly-witnessed, officially certified flight of an airplane in the United States.

Who made the historic flight? Hint: it was not the Wright brothers!

The flight was made by New York aviation pioneer Glenn Curtiss (1878-1930) in Hammondsport, NY. It was unlike the Wright Brothers’ earlier flights, which had not been pre-announced, public affairs and/or were not certified by an official organization.

Curtiss had begun his career years earlier as a maker of bicycles, then motorized bikes, and then motorcycles in his shop in Hammondsport. He had a flair for tinkering, testing, trying things out, and continually improving them.

In 1906, Curtiss exhibited his engines at a convention of aviation enthusiasts in New York City, hoping to boost sales to makers of dirigibles and biplanes. He met Alexander Graham Bell, the famed inventor of the telephone, who had moved on to an interest in experimental aircraft. Bell had developed huge flying machines that were a hybrid of gliders and kites and needed powerful engines to make the awkward machines fly.

Curtiss advanced from engine maker to airplane designer and test pilot. The team’s first biplane crashed on its second flight. Bell suggested installing hinged flaps, soon to be called “ailerons,” to the trailing edge of each wing which the pilot could maneuver to aid with horizontal stability and control. The concept was not new, but Bell and Curtiss refined it and it helped the AEA’s next plane, the White Wing (white cotton cloth covered its wings) to achieve four successful short flights in May 1908 before crashing.

This article was originally posted on NewYorkHistoryBlog.org