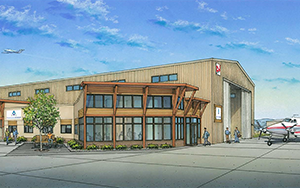 Photo courtesy of No Plane No Gain

Due to the vital general aviation presence in the country, many airports are finding the need to expand. For this reason, Rock Springs-Sweetwater County Airport in Southwest Wyoming just announced a $4.8 million construction contract for a new general aviation terminal!

This strong GA presence was a major factor in the airport’s recent announcement of a $4.8 million construction contract for a new general aviation terminal and hangar facility.

“In a 2013 economic impact study performed by the state of Wyoming, the Rock Springs-Sweetwater County Airport was responsible for nearly $30 million in economic impact,” said airport Manager Devon Brubaker. “We believe that this year’s updated study will show that number has grown exponentially. We are confident that this project will lay the foundation for years of economic prosperity.”

The new terminal and hangar will further increase the airport’s strategic initiative to boost economic development in the region, said Brubaker.