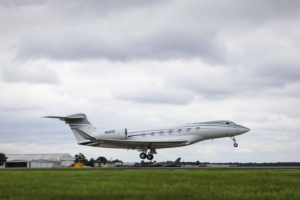 The G600 took off from Savannah/Hilton Head International Airport at 3:07 p.m. Tuesday. During the 2-hour and 55-minute flight, the aircraft reached an elevation of 51,000 feet at a speed of Mach 0.85.The aircraft landed back in Savannah at 6:02 p.m. local time.

“The goal of including a production aircraft in our flight-test program is to ensure we deliver the most functional, comfortable and reliable cabin environment for our customers,” said Gulfstream president Mark Burns.

This article originally posted on SavannahNow.com.