CFS Jets recently returned from one of the most anticipated aviation shows, the 2017 Business Aviation Convention & Exhibition (NBAA-BACE). The 70th annual show brought in 1,100 exhibitors and over 27,000 attendees to the Las Vegas Convention Center, October 10-12. With new aircraft being showcased and new relationships formed, CFS Jets, had a successful trip and we are excited for what next year will bring.

“This year’s show was special in many ways,” said NBAA President and CEO Ed Bolen. “We celebrated NBAA’s 70th anniversary, and how our industry is stronger when we work together. We gathered in the company of aviation leaders and legends, like Capt. ‘Sully’ Sullenberger and Capt. Jim Lovell. We saw the launch of exciting new products, and we brought a citywide convention to Las Vegas, which the city welcomed with open arms.” 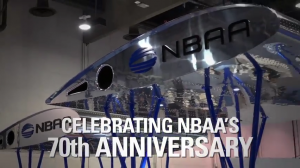 Bolen said that with this year’s convention, NBAA hoped to “make Las Vegas proud, just as Las Vegas has made America proud.” Before the launch of the show, NBAA Charities made a $10,000 contribution to the Las Vegas Victims Fund, and throughout the event, the association encouraged show participants to contribute to the fund as well. During the show’s opening session, local leaders welcomed attendees, saying “with all of you, our city will continue to be Las Vegas strong.”

As NBAA-BACE 2017 wrapped, organizers pointed to several indicators of the show’s strength and enduring value:

This article originally posted on nbaa.org.