ADS-B: Where We Are Now

Automatic Dependent Surveillance–Broadcast (ADS-B), one of the foundations of NextGen, helps pilots and air traffic controllers create a safer, more efficient National Airspace System (NAS). ADS-B Out — a basic level of aircraft equipage — relies on aircraft avionics, a constellation of GPS satellites, and a network of ground stations across the country to transmit an aircraft’s position, ground speed, and other data to air traffic controllers. Its coverage area and accuracy is greater than radar, and it can be used in areas where radar coverage is not possible, such as over the Gulf of Mexico. ADS-B transmits surveillance information about an aircraft in flight or while on the ground — a key advantage for pilots and air traffic controllers. The FAA has mandated that aircraft operating in most controlled U.S. airspace be equipped for ADS-B Out by January 1, 2020.

ADS-B In, which is not mandated, offers additional options to operators who equip, such as a display of other aircraft in the vicinity. General aviation operators who equip can also benefit from free real-time graphical weather and other aeronautical information sent directly to the cockpit.

ADS-B has been integrated into automation platforms at all en route air traffic control facilities and into more than one-third of all terminal radar approach control (TRACON) facilities, including the 11 biggest U.S. TRACONs. The FAA plans to deploy ADS-B to all other TRACONs by 2019. 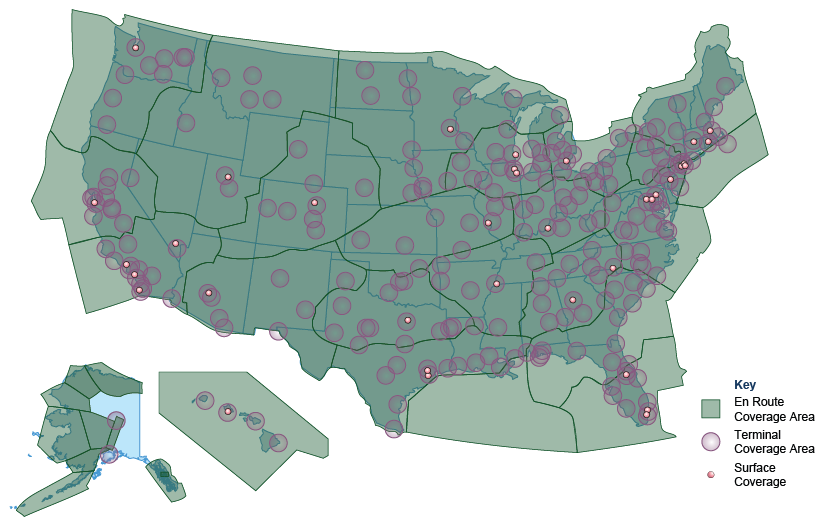 In 2016, the FAA worked with Mexico’s air traffic service provider, SENEAM, to expand ADS-B surveillance coverage over the Gulf of Mexico using jointly funded ADS-B stations. The new ground stations benefit aircraft flying over the Gulf between the United States and Mexico.

The additional ground stations in Mexico provide seamless surveillance coverage for air traffic routes, enabling the use of more-efficient aircraft separation and increasing capacity over the Gulf from 75 to about 85 aircraft per hour. These ground stations will save operators a total of $70 million through 2035 by enabling more Gulf flights over the United States-Mexican airspace boundary. Increased capacity reduces delays during peak periods, saving aircraft operating costs and passenger time. Houston Center uses ADS-B surveillance data from these radio stations as part of routine operations.

For airlines that fly regular routes over the Gulf, such as JetBlue, the ADS-B infrastructure means more-efficient flights with fewer diversions due to weather, especially with offshore routes. JetBlue has documented significant fuel savings from flying more-direct routes with ADS-B.

United has also realized fuel savings, installing ADS-B in the airline’s 700-plus aircraft fleet and training its pilots. Under an agreement with the FAA, this includes 110 Boeing 737s that operate all over the NAS, including offshore routes from Houston to the Caribbean and along the U.S. East Coast. […]

The FAA is also exploring ADS-B’s capabilities with respect to an increasing number of commercial space vehicle launches.

The FAA is working with operators and other ANSPs to evaluate the potential benefits of providing ADS-B data to controllers of oceanic airspace. Alternative approaches to reduce separations standards include using ADS-B or using an enhanced version of ADS-C.