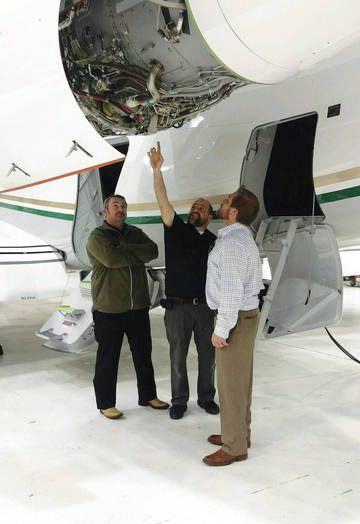 EAST ALTON — A multi-million dollar company continues to grow at St. Louis Regional Airport where stakes are in the ground for the global business’ new hangar.

West Star Aviation plans to have the hangar built by next spring. The 47,300-square-foot structure would be the second hangar the company has built in the last three years to accommodate its expanding business that specializes in maintenance, repair and overhaul (known in short as MRO in the aviation industry), mostly for corporate jets, but also for some privately-owned jets. When West Star brought its first MRO hangar, which held its grand opening in May 2014, it also brought 150 immediate jobs and more than $20 million in revenue.

“Our customer base continues to grow and four years of being the number one MRO, the word is out that this is the place to be,” West Star Aviation General Manager Eric Kujawa, of East Alton, said to The Telegraph. “The culture of the employees and the business, the Midwest work ethic, is what everyone wants to see and that’s what we have.”

“It’s really nice to be at a general aviation airport without commercial traffic,” Kujawa noted.

One caveat that the St. Louis Regional Airport faces in its tenant West Star building a new hangar is needed aircraft parking extension for the business development. St. Louis Regional Airport Authority, a taxing district with a board of commissioners, is pursuing federal monetary support for a ramp extension project, for which West Star Aviation will undertake, but the company would be reimbursed.

“The existing (jet) parking doesn’t extend to the new hangar,” said the airport’s Director of Aviation David Miller, also its chief executive officer. “We’ve had success in getting three congressmen to endorse the project.”

“West Star has been the most successful tenant. It has put the St. Louis Regional Airport on the global map,” Miller noted. “The company has been good for the airport and the community around it.”

For example, a vendor for West Star, Dugan Tool, closed two older locations to open a new facility at St. Louis Regional Airport. Many of the airport business park’s tenants have provided services to West Star for years, said Miller, of East Alton.

Corporate representatives are required to stay with their company’s aircraft, which also adds up for about 2,000 overnight hotel/lodging stays per year, Miller said.

This article originally posted on thetelegraph.com.