Aircraft on the Front Lines of the Fight Against California Wildfires 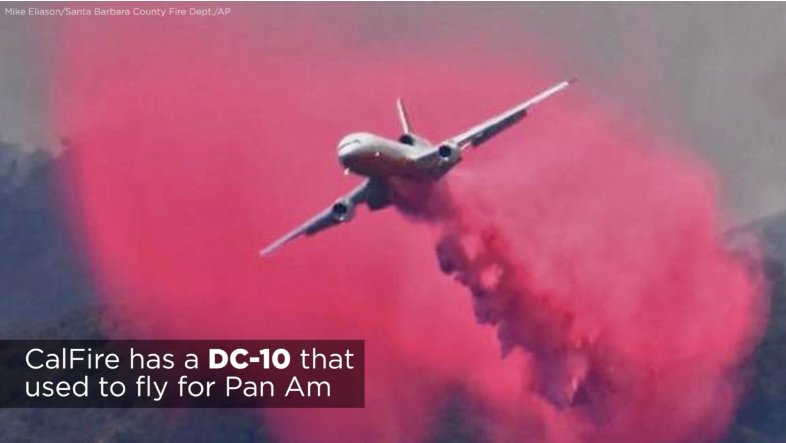 LOS ANGELES — As crews work around the clock to battle the wildfires that have broken out in California, air support has proven to be an integral piece of first responders’ attack plan. These are just a few of the aircraft used to battle the blazes:

Boeing 747
The modified 747 is equipped with a 24,000-gallon tank and a pressurized system that can shoot flame retardant at high pressure or simply disperse it while flying over a fire. Unlike helicopters that can hover above a fire, the 747 must approach at 140 knots and pass between 400 and 800 feet above the flames to deliver its massive load.

DC-10
The DC-10 used by Cal Fire used to fly for Pan Am and American Airlines. It can carry 12,000 gallons of flame retardant that, when dispersed, creates a cloud 300 feet wide and a mile long. According to Cal Fire, one DC-10 drop is equivalent to 12 drops from an S-2 air tanker. Because of its size and the infrastructure needed to support its operation, this jet is only used for extended missions.

Grumman S-2T
Known for its speed and maneuverability, the S-2T was a U.S. Navy anti-submarine warfare airplane in a past life. Cal Fire now has approximately two dozen of the turboprops in its arsenal. The aircraft can cruise at speeds of 305 mph with a 1,200-gallon payload commonly used for initial attack delivery.

UH-1H
Dubbed the “Super Huey,” the UH-1H was once used by the Army for troop and cargo transport operations. Now heavily modified, the choppers can do it all: crew transport, water and foam drops, medical evacuations backfiring operations and infrared mapping.

CL-215/ Bombardier 415 “Superscooper”
Nicknamed the Superscooper, these seaplanes scoop water from lakes and reservoirs into their belly that can be directly dropped onto flames or mixed with a foam retardant. The Bombardier model can travel at more than 200 mph with 1,621 gallons of water on board.

Sikorsky S-70 “Firehawk”
The Firehawk is a civilian version of the well-known Blackhawk helicopter commonly used by the United States Army for air assault missions. The aircraft can either be used with a large 1,000-gallon tank mounted on its belly or with a bucket.