Evolution of the Hawker 850XP

The evolution of the Hawker 850XP is pretty impressive considering its survival of a shooting war, how it remains the only midsize business jet currently approved to land on gravel and grass, and the upgrades it has received over the years. Read the full story below and if you decide the Hawker 850XP might meet your aircraft needs, click here for more information on this featured aircraft.

Much of post-colonial Africa was a dangerous and confusing place in the 1980s, and nowhere were conditions more perilous and chaotic than in Angola, where 15 countries and groups took sides with competing factions in a protracted civil war. In the midst of this mess, culling friend from foe was not always easy.

Case in point: what happened on Aug. 7, 1988, when a Botswanan government Hawker 800A midsize business jet was en route from that country’s capital, Gaborone, to the Angolan capital of Luanda. Botswanan President J.K. Quett Masire was aboard, along with seven top aides, destined for a meeting of regional African leaders. Because the 27,000-pound airplane was a new delivery, British Aerospace Hawker demonstration pilot Arthur Ricketts was in the right seat, flying copilot.

The Botswanan aircraft was an hour from its destination and cruising at 35,000 feet when an Angolan Air Force Soviet MiG fighter mistook it for an enemy airplane and began firing at it. A missile from the MiG sheared the starboard engine off the Hawker, damaged the wing and flaps, punched a substantial hole in the fuel tank, caused the aircraft to decompress, and incapacitated the pilot. A second missile lanced the separated engine as it fell.

Despite all this, Ricketts got the airplane safely to the ground. Not only did everybody survive but the aircraft was rebuilt and returned to service.

This is the sole known incident of a business jet surviving a direct hit from an air-to-air missile, and it further cemented the Hawker’s reputation as a “flying tank.” The aircraft, which ended its 51-year production run in 2013, remains popular today and is the only midsize bizjet currently approved to land on gravel and grass.

The Hawker has been through many corporate masters—de Havilland, Hawker-Siddeley, British Aerospace, Hawker Beechcraft, and Textron—and been fitted with a variety of avionics, airfoils, and engines, some better and more efficient than others. This is the flying equivalent of the journeyman quarterback who steps in to save the season without drama or fanfare. A Hawker will never win any aerodynamic beauty contests, certainly not for the first two decades of production (through model designations 700), which featured exterior styling that one jet broker described to me as something “only a mother could love.” 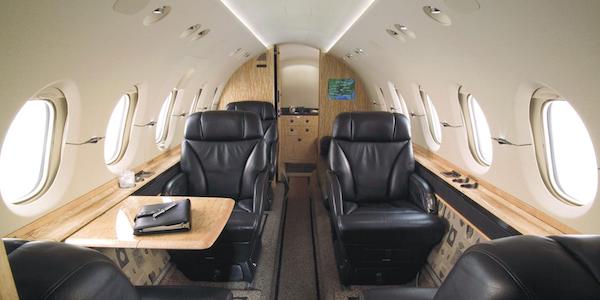 Even in later years, when a more tapered nose, more swept windshield, and winglets were added, there was no getting past the Hawker’s inherent squatness, and that translated into a long day for transcontinental trips. The aircraft topped out at 442 knots and usually flew slower—faster than the family sedan, but pokier than the airlines much of the time. Put a Hawker up against a Cessna Citation X on a trip from Florida to California and, by the time the Hawker reaches its destination, the Citation’s passengers will have not only arrived but finished drinks and dinner and gone dancing.

And then there’s the cabin. Be mindful that the Hawker was designed at a time when the average American male executive weighed about 170 pounds, stood five-foot-nine, and lived on cigarettes and martinis. Waistlines in the western world are a bit wider now and the Hawker’s 551-cubic-foot cabin seems a little cramped—especially when you jam eight or nine passengers into it—compared with the likes of a Cessna Citation Sovereign (620 cubic feet) or a new Embraer Legacy 450 (919 cubic feet). But stacked up against the contemporaries of its day, such as a Learjet 60 (453 cubic feet) or a Gulfstream G150 (465 cubic feet) a Hawker cabin compares favorably; and if you’re upgrading from a King Air, it can feel big indeed.

True, Hawker cabins have evolved over the years—but only to a point, as the basic fuselage has remained remarkably unchanged. The Hawker 800 first flew in 1983 and featured major performance improvements over previous models. Between 1983 and 1995, the company produced 275 Model 800s.

Deliveries of the Hawker 800XP began in 1995 and a major change occurred on the model in 1999, when oval window frames, sidewall lighting, redesigned sidewall table access, and restyled seats were added to the cabin. These changes resulted in a brighter, softer, more flowing look and were an immediate hit with customers.

The cabin of the Hawker 850XP (2006–2009 model years, $13.65 million new) features five single executive seats and one three-place divan with a curved, trenched center aisle traversing the middle. The belted potty in the lavatory, though a legal seat, is best reserved for emergencies, the very diminutive, or the hapless passenger who draws the short straw. The single seats slide and swivel and have limited recline. In-cabin stowage is modest with a forward closet opposite the entry door. There’s another wardrobe in the aft lav. They combine for a modest 50 cubic feet of luggage space.

The Hawker 850XP is indistinguishable from its Model 800 predecessor, save for the addition of factory winglets, which boost range by 100 nautical miles, and an upgrade to the very capable Rockwell Collins Pro Line 21 four-screen digital avionics suite in the cockpit. 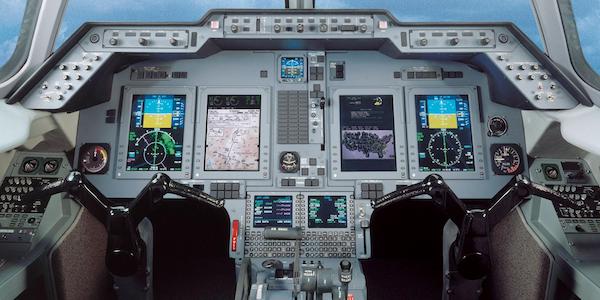 Over the years, Hawkers have received significant upgrades in airfoils, engines, and systems. One of the most important changes came during the 1970s with the advent of more efficient engines. During the late 1960s, Garrett (now Honeywell) developed the TFE731 turbofan engine and that company continues to support it well, especially with its MSP hourly maintenance program. The engine—which enabled a slew of midsize corporate jets to come to the market in the 1970s and early 1980s—represented a quantum leap in efficiency and meets Stage III anti-noise requirements. The aircraft also feature simple mechanical systems that stand up to ham-handed pilots and heavy use.

Although comparatively slow, the Hawker packs a lot of utility. Operators rarely have to choose between full seats and full fuel. You can load an 850XP with full fuel and nine 200-pound passengers on a relatively warm day and still use 5,000-foot runways. This durability and utility helped to make Hawkers a mainstay in several charter fleets as well as in the formative years of fractional providers NetJets and Flight Options.

Today, a 10-year-old Hawker 850XP goes for around $3 million, and it’s hard to find anything else for around that price that offers its range and payload numbers, not to mention the peace of mind you get from flying in a jet that can land on grass or gravel—or survive a shooting war.