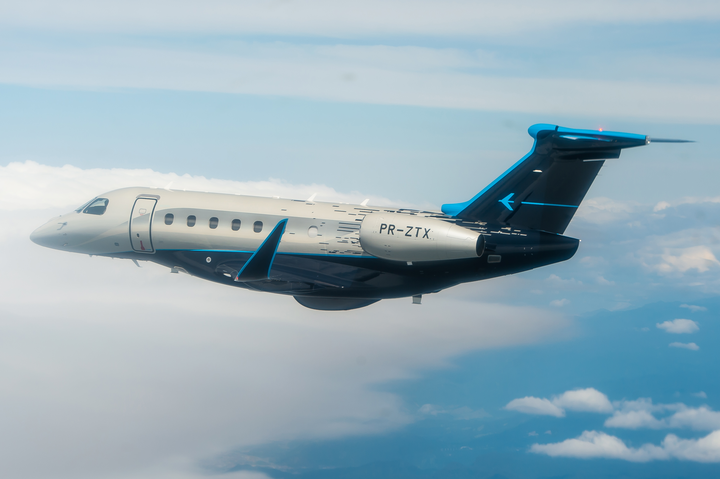 Big news has hit the aircraft industry and everyones eyes are on the new Embraer Praetor 600! As recently released by the company: Embraer Praetor 600 Now Triple-Certified, Receiving EASA and FAA Approval, Becoming The Most Disruptive and Technologically Advanced Aircraft to Enter the Super-Midsize Category. Contact CFS Jets today to talk to one of our experienced experts to learn more about this news worthy aircraft — (704) 359-0007.

Interested in an Embraer? Click here to see the immaculate details of the 2015 Embraer Legacy currently available at CFS Jets!

São Paulo, Brazil, May 20, 2019 – Embraer announced today that the company’s new Praetor 600 super-midsize business jet was granted its Type Certificate by EASA (European Union Aviation Safety Agency) and by the FAA (Federal Aviation Administration). The announcement was made during the company’s press conference at the European Business Aviation Conference and Exhibition (EBACE) in Geneva, Switzerland.

“Now certified by the key aviation safety agencies of the world, the Praetor 600 has proven to be the most disruptive and technologically advanced super-midsize business jet to enter the market, paving the way to begin deliveries now in the second quarter,” said Michael Amalfitano, President & CEO, Embraer Executive Jets. “Just over six months since its launch and debut, the Praetor 600 has already been outperforming its certification goals, raising expectations of the ideal super-midsize. Once again, I want to thank and congratulate the entire Embraer family for bringing to market such a revolutionary aircraft, designed to create a new value experience for customers and shareholders alike.”

Brazil’s Civil Aviation Authority (ANAC—Agência Nacional de Aviação Civil) awarded the new aircraft its Type Certificate on April 18 of this year. The Praetor 600 was announced and debuted at NBAA-BACE, in October 2018, and became the only super-midsize business jet to be certified since 2014.

The Praetor 600 began its journey to EBACE at São Paulo International Airport in Brazil, on May 8, arriving in Fort Lauderdale, Florida with a six-passenger equivalent payload of 1,200 lb (544 kg). This was the aircraft’s longest flight to date, covering 3,904 nm (7,230 kilometers) over an air distance of 3,678 nm (6,812 kilometers), having faced up to 43 knots of headwinds and descended into Miami’s distinct air space pattern.

On May 16, the Praetor 600 departed the U.S. to Europe with Sustainable Alternative Jet Fuel (SAJF) to join the Embraer portfolio fleet at “Fueling the Future,” a business aviation biofuel event held at TAG Farnborough Airport, on May 18. This event marked the first anniversary of the launch of the Business Aviation Coalition for Sustainable Alternative Jet Fuel (SAJF), at EBACE 2018, and the 10th anniversary of the Business Aviation Commitment on Climate Change, announced in 2009. The event gathered business aviation and civic leaders to discuss the path forward for the continued adoption of SAJF in business aviation, in order to fulfill the coalition’s goal of reducing emissions through investments and innovation.

The Praetor 600 is the best performing super-midsize jet ever developed, surpassing all its main design goals and becoming capable of flying beyond 4,000 nautical miles in long-range cruise speed or beyond 3,700 nautical miles at Mach .80 from runways shorter than 4,500ft, complemented by an outstanding payload capability.

The Praetor 600 is the first super-midsize jet with full fly-by-wire technology, which powers the Active Turbulence Reduction that not only makes every flight the smoothest but also the most efficient possible.

The Embraer DNA Design interior eloquently explores every dimension of the only super-midsize to feature a six-foot-tall, flat-floor cabin, stone flooring and a vacuum service lavatory, all in the same certified aircraft. The class-exclusive Active Turbulence Reduction and 5,800-foot cabin altitude, complemented by a whisper silent cabin, have set the highest standards in customer experience in the super-midsize category. In addition to the full-service galley and a wardrobe, eight fully reclining club seats may be berthed into four beds, and the baggage space is the largest in the class.

Advanced technology throughout the cabin is also a trait of the Embraer DNA Design, beginning with the industry-exclusive Upper Tech Panel that displays flight information and offers cabin management features also available on personal devices through Honeywell Ovation Select. High-capacity, ultra high-speed connectivity for all aboard is available through Viasat’s Ka-band, with speeds of up to 16Mbps and unlimited streaming, another industry-exclusive in super-midsize jets.