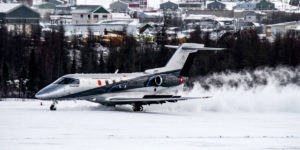 The Pilatus PC-24 has obtained its rough field certification. The PC-24 was developed to use on rough fields. This will double the number of runways this business jet can land on. Read the article below to find out more on this achievement!

Pilatus Aircraft announced it obtained rough field certification for its PC-24, allowing the light twinjet to take off and land on grass, wet earth, dry sand, gravel, and snow. Approval for operations on dry sand and gravel was secured in 2018, and the addition of wet and snow-covered runways was the result of a “comprehensive” post-certification test campaign conducted last year.

The Swiss aircraft manufacturer said it developed the PC-24 for use on rough fields from the outset. This capability nearly doubles the number of runways worldwide where the business jet can land, it said.

“Our PC-24 has proven that it is capable of flying the full range of missions for which it was developed,” said Pilatus chairman Oscar Schwenk. “The Royal Flying Doctor Service of Australia and operators in North America or Africa already use rough field runways on a regular basis, proving just how unique the PC-24 is.”

The European Union Aviation Safety Agency (EASA) requires tests for the certification of takeoff and landing capability to be carried out on different runways. Grass-runway testing was done in Goodwood, England; Kunovice, Czech Republic; Poitiers, France; and Duxford, England. A runway in Woodbridge, England, was used to reproduce complex conditions to meet all test specifications for takeoffs and landings on wet dirt surfaces, and snow-covered gravel runway trials were performed at Kuujjuaq in Canada.