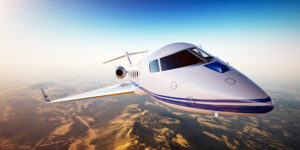 With depleting business from the effects of COVID-19, pilot Van Kleef found a new purpose for his career that keeps him occupied and his planes fresh. Below Kleef shares how he began doing angel rides which are free, non-emergency plane rides for the purpose of getting people enduring serious illnesses to the medical treatment they need.

With oil and gas operations paused, and his company’s Cessna 414 idle during the midst of the COVID-19 crisis, Tom Van Kleef found a silver lining to the current challenges – one that will outlast the pandemic, with positive outcomes for the company and the community.

Van Kleef is the executive vice president, general manager and pilot for Oil Mountain Energy, what he terms “a pure mom-and-pop” oil and gas company based in Casper, WY. According to Van Kleef, the NBAA-member company often flies its turboprop into the two epicenters for the oil and gas industry, Denver and Houston, as well as other primarily Western locations.

With little business to conduct because of the pandemic, Van Kleef was concerned about staying current and keeping the aircraft in optimum condition.

“We still wanted to be productive, even though our business travel was curtailed,” he said. “Then I found out about Angel Flight West (AFW) through our Twin Cessna Flyer group.” The nonprofit organization arranges free, non-emergency air travel for children and adults with serious medical conditions and other compelling needs.

Fast-forward a couple of months, and Van Kleef has already flown a number of missions for AFW, including helping in the transport of a 15-year-old boy from his home in the Kalispell, MT-area to his life-saving heart surgery in Denver. “We flew the Kalispell-Casper leg,” said Van Kleef. “Turns out the young man wants to be a pilot, so we masked up and talked aviation.”

Van Kleef has also flown a 6-year-old who needed cancer treatment. “We sat him in the cockpit and showed him around the airplane,” said Van Kleef, who is getting more involved with a local organization that assists families who have a child battling cancer. “They often need to go to Salt Lake City or Denver, and we are ideally suited in particular for helping out with the return flights back home.”

The Wyoming pilot and businessman said flying those in need of medical care is a win-win for flight departments. “It helps keep the pilot and aircraft current, and it gives me the opportunity to fly into airports that we often list as our alternates, but don’t normally access,” added Van Kleef. “No matter what size aircraft you have, this a terrific and timeless value proposition for flight departments.”