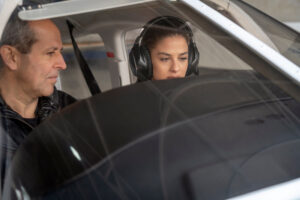 The ACE Academy, an aviation camp in Atlanta, is inspiring children to look to aviation for their future. Mitch McCune, the CEO of CFS Jets, was destined to fly and started at a young age. At the age of 12, Mitch was flying with his Dad on the weekends, soloed on his 16th birthday and flew Private on his 17th birthday. Continue reading to learn more about the ACE Academy and how they influence the next generation of pilots. Learn more about the CFS Jets team!

Delta Air Lines pilot Kyle Greene is on the front lines of the airline industry, as carriers struggle to get enough pilots trained and in the cockpit to operate thousands of flights a day amid a travel rebound.

Greene also sees an even bigger challenge looming on the horizon: How will the industry find enough new pilots to operate even more flights in the years to come?

“At the current rate, there’s not enough pilots,” Greene said.

The COVID-19 pandemic accelerated retirements, exacerbating concerns about a looming pilot shortage as more baby boomers leave the cockpit. “We gotta replace those people,” he said.

It might not be immediate, but some of the replacements are already lining up, and they’re just 13-18 years old.

Greene is co-director of the Organization of Black Aerospace Professionals’ Aerospace Career Education (ACE) Academy in Atlanta, a student summer camp for aspiring pilots and other young aviation enthusiasts.

The ACE Academy in Atlanta, a week-long program sponsored by Delta, has operated for more than 20 years to introduce middle school and high school students to aerospace. It’s one of dozens of ACE Academies operated around the country by the Organization of Black Aerospace Professionals with the goal of increasing diversity in the aviation industry — and broadening the prospective talent pool.

After a two-year hiatus due to the COVID-19 pandemic, the ACE Academy in Atlanta relaunched this month just as the risks of a pilot shortage have become painfully apparent.

Regional carriers and other airlines have had to slash flight schedules because they can’t hire enough pilots to staff them.

Atlanta-based Delta says it is able to attract enough pilots and is hiring 200 a month, but is struggling to get them through training quickly enough as travel roars back. Delta has had to cut its flight schedule this summer and through the rest of the year as a result.

The Air Line Pilots Association union says the real problem is that airlines aren’t paying pilots enough for their training and experience — regional carriers, where many pilots start their airline careers, have long paid far less than large carriers like Delta. But the union also emphasizes the need to recruit more young people to become pilots.

In fact, dozens of the teenagers who attended ACE camp as students years ago have now become professional pilots, including at Delta.

Greene is one of those students. Growing up in Atlanta, “I always knew I wanted to be a pilot,” he said.

In 2007 at the age of 16, he attended ACE camp, then started flight training, got his pilot’s license during college, and later became a regional jet pilot before being hired by Delta five years ago.

“Almost anybody can be a pilot,” Greene said — but he also notes there are serious barriers to entry. “The biggest hurdle is money and time,” he said, adding that it can cost more than $60,000 for the flight training.

Delta pays for some flight hours for ACE students who graduate to the two-week Solo Flight Academy, where they attend ground school and get flight training.

Those students joined ACE graduates for a “Dream Flight” on a Delta Boeing 757 from Atlanta to the Air National Guard Base in Duluth, Minnesota on Friday to see the U.S. Air Force Thunderbirds.

Among those on board was 17-year-old Eli Boyd, whose parents connected him with the ACE program after seeing this passion for aviation from an early age. Eli got a writing assignment in third grade and “it was all about flying,” said his father, Samuel J. Boyd Jr. This month, Eli flew a plane himself for the first time during the Solo Flight Academy.

“Then you have a confident kid that believes they can do something that’s incredibly difficult,” said Samuel J. Boyd Jr. “That’s a very good recipe there for success.”