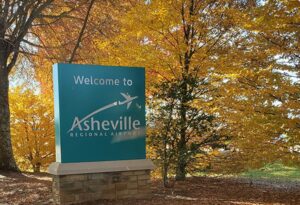 Recently, Asheville’s Regional Airport was named the third busiest airport in the state by the FAA. With the increased demand of flying, the airport is experiencing its highest number of passengers to date. Continue reading to learn more.

AVL has fully recovered from the pandemic and has surpassed former utilization records nearly every month this year. So far this year, passenger numbers are more than 10% ahead of the same period in 2019, the airport’s record year.

“We have never seen such high numbers at AVL,” said Lew Bleiweis, A.A.E., President and CEO of the Greater Asheville Regional Airport Authority. “The growth is phenomenal, and it is continuing. If passengers continue to fly to and from AVL at the pace we’ve been experiencing, 2022 will be the biggest year in our history.”

The growth at AVL can be attributed to three key factors. First, airlines have continued to make significant investment in the western North Carolina market by adding new routes, seat capacity and by new airlines entering the market. Second, the region continues to grow – with increases in local business and leisure travel, as well as a tourism destination that draws visitors from around the globe. And third, the strength of the economy is contributing to the growth.