Floating, Foiling and Flying: How Does REGENT’s Electric Seaglider Work? 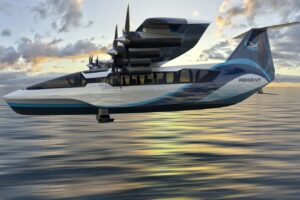 It’s been a busy time for progress in electric aviation, with several new aircraft and vehicles taking to the skies for test flights across the world recently, including a new type of vehicle that will transport passengers just a few feet above the surface of the water.

The previous weekend, Vertical Aerospace’s eVTOL (electric vertical take-off and landing) aircraft took off from the ground for the very first time, making it the first British company to start flight tests with a new aircraft in over 20 years.

And on September 28, Lilium shared footage of the technology demonstrator for its eVTOL, making a full transition from hovering to level flight.

It’s not an eVTOL or a traditional passenger plane, but there was also another interesting development in electric flight in September, when electric seaglider maker REGENT announced it had taken to the skies. Or to be precise, a few feet above the water, carrying out its first test flights with a demonstrator to prove that its innovative ground effect-inspired craft works. Here, we take a closer look at this innovation in the field of electric travel.

What is ground effect?

REGENT hopes that the seaglider, a new class of vehicle, will provide an alternative to traditional air travel or ferries for coastal regions, such as in New York City, New Zealand, and the Hawaiian Islands.

The idea of using ground effect, where vehicles glide along a cushion of air between the surface (whether of ground or water), to create an efficient form of flying vehicle, has been around for decades. The most famous ground effect vehicles are the Soviet Ekranoplans, which were developed for naval forces and flown by military pilots.

An earlier AeroTime investigation looked at the various start-up companies that have been trying to design ground vehicles for the south-east Asian market and the difficulties, literally, in getting off the ground. One of the major issues is that ground effect aircraft, like traditional seaplanes, require calm seas for take-off.

Now REGENT thinks it has cracked it by using floating, foiling and flying, and hopes passengers will be flying on its all-electric seaglider, skimming over the water at speeds of up to 180 miles per hour, in 2025.

The company’s chief executive, Billy Thalheimer, describes the new technology as “the next great moment in the history of human transportation” and took to social media on September 21, 2022, to publicize the test flights and explain how the seaglider will work.

How do you take-off in choppy water?

In his post, Thalheimer explains the difficulties. In order to take-off, wing-in-ground-effect (WIG) craft require high speeds. However, as soon as you have waves, this makes take-off and landing either uncomfortable or impossible.

The REGENT seaplane therefore uses a hydrofoil, allowing the craft to sit slightly above the waves and making the ride safer and more comfortable for passengers.

The next problem, though, is that if hydrofoils travel too fast, bubbles form and the lift is reduced, hampering take-off.

As Thalheimer reveals, REGENT has got around this problem by using a “blown wing”, where a series of electrically driven propellers on the wing drive more air flow over the wing, thus generating lift over the wing, even while the craft itself is moving more slowly.

“Wave-tolerance of hydrofoils + Low-speed takeoff of blown wing = Vehicle with convenience of a ferry (no long airport lines) with the speed of an aircraft,” Thalheimer described it on the Twitter thread.

“People have been attempting to make wing-in-ground effect vehicles viable for 60 years, and in 15 months we have gone from a drawing on a napkin to the first successful flight,” Klinker commented in a September 15 press release announcing the test flights.

How will traveling on the REGENT seaglider look?

REGENT’s seaglider operates in three modes. When it first leaves the dock, it operates like a traditional boat. Once it leaves the harbor and speeds up, it rises on its hydrofoil, skimming comfortably through the waves. When it reaches open water, it lifts off to within a wingspan of the water’s surface, retracting the hydrofoil and accelerating to its cruising speed. The craft combines advanced digital flight software with simple boat controls.

Regent released a video of the test flight here.

The test flight in Narragansett Bay, Rhode Island was performed by its technology demonstrator, which is a quarter of the size of its planned 12-seat passenger craft, the Viceroy.

Thalheimer says the seagliders will slash the cost and time of regional trips, predicting Los Angeles to San Francisco or Boston to New York in 2 hours 15 minutes for $100 or Miami to the Bahamas in 1 hour 20 minutes for $63.

REGENT has attracted some big names from across the world. Early companies to show an interest were ferry companies such as Brittany Ferries and Croatian firm Split Express.

The company has also received investment from Hawaiian Airlines, which is interested in REGENT’s plans for a larger seaglider that can seat up to 100 people.