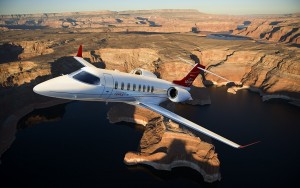 Bombardier Aerospace announced that Learjet has been awarded Federal Aviation Administration Certification for its Learjet 75 aircraft.

“We are delighted to have received FAA certification for the first Learjet 75 business jet”, said Ralph Acs, vice-president and general manager, Learjet, Bombardier Business Aircraft. “This jet is clearly a leader among its peers with its Bombardier Vision flight deck offering unmatched capability in its segment, the class-defining performance and efficiency improvements, as well as a completely new interior. This aircraft, along with its smaller sibling the Learjet 70 business jet, clearly have a bright future in business aviation.”

FAA certification for Learjet 75 aircraft was received on Nov. 14, 2013. Certification and delivery efforts and activities are in progress for the Learjet 70 aircraft.

The aircraft has enhanced performance through an engine thrust increase with an improved Honeywell engine, offering improved takeoff field length performance over its predecessor. The new avionic system contributes to achieving weight savings and the new canted winglets improve aerodynamic efficiency. Overall, up to a nine per cent improvement in field performance under hot and high conditions and up to a four per cent improvement in fuel efficiency are expected.

Based on the Learjet 85 aircraft interior design and technology, the Learjet 70 and Learjet 75 aircraft include: improved comfort and styling of the seats; cabin management system featuring individual touchscreen monitors with full audio and video control; LED lighting throughout the entire aircraft; a generous baggage suite and a spacious galley for optimized catering, work and storage space. The advanced connectivity options of the Learjet 70 and Learjet 75 aircraft ensures the highest levels of convenience.