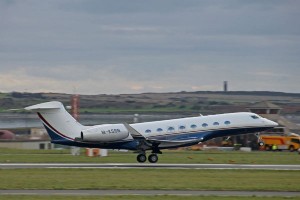 After completing a flurry of G650 deliveries in November, Gulfstream looks on track to deliver 45 G650s by the end of 2013.

Quarter end and year end are traditionally the busiest times for business jet manufacturers, as they look to invoice as many new customers as possible, by delivering them their shiny new aircraft.

The rush is especially noticeable at quarter end, with relatively few aircraft delivered throughout the quarter, followed by a disproportionate amount of deliveries bunched up in the final two weeks.

The final quarter of 2013 will, of course, be no different, but this year Gulfstream managed to get a head start on those final two weeks, by delivering a total of seven G650 private jets in a seven-day period in the middle of November. This figure is all the more impressive when you realise that Gulfstream had completed two G650 deliveries up until that point in the quarter.

On November 15th, Gulfstream reached a mini-milestone, delivering the first G650 into Latin America, with msn 6031/N606SA going to Colombia’s Groupo Aval Acciones. The aircraft, which joins a 2012 build G550 msn 5380/N506SA, will be based in Bogota.

On November 18th, there were two G650 deliveries, with msn 6054/N650GL being registered to a Trustee and delivered into Baltimore. The second delivery on the day saw another G650 heading to the Middle East, with msn 6037/M-USIK being registered to YYA Aviation in the UAE. YYA Aviation also operates a 2005 build Global XRS msn 9165/M-ARSI on behalf of the Cairo-based Orasom Group, so it’s currently unclear where the aircraft will be based.