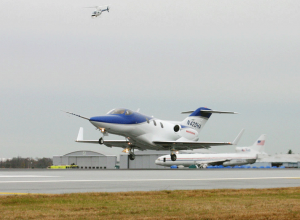 “The proof-of-concept HondaJet first flight was a pinnacle moment,” Honda Aircraft president and CEO Michimasa Fujino told AIN. “Our team had spent years researching and testing the advanced theories and concepts incorporated into the aircraft’s innovative design,” which includes its over-the-wing engine mounting.

The Dec. 3, 2003 maiden flight, and the flight-tests that followed, proved the HondaJet design met performance goals, he said. “Armed with this technical proof, we made a strong case for Honda ultimately to decide to commercialize the HondaJet in 2006. Since then, we have been working hard not only to develop the HondaJet but also to build the company to manufacture the aircraft and support HondaJet customers.”

The HondaJet prototype was retired earlier this year, “after successfully completing ground and flight tests to validate the jet’s advanced design concepts,” and is now on display at the delivery center at Honda Aircraft’s world headquarters in Greensboro, N.C.

Meanwhile, five production-conforming HondaJets in the test fleet have flown more than 4,000 test points and conducted “numerous missions” to remote testing sites across the U.S. Honda Aircraft says it expects FAA certification of the HondaJet late next year.