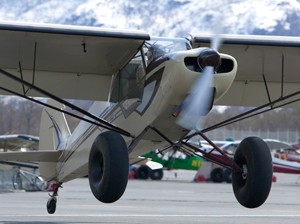 Short take-off and landing airplanes always produce a lot fo attention: A modified aircraft, originally created for Alaskan bush-pilot necessity but that also created one of the world’s most unique aviation competitions, will be part of the “Valdez STOL” (short takeoff and landing) flying activities at EAA AirVenture Oshkosh 2014 set for July 28-August 3 at Wittman Regional Airport in Oshkosh.

Air show featuring the unmatched capabilities of the airplanes that compete at the annual Valdez Fly-In & Air Show in May each year will be held several days at Oshkosh. More than a dozen of these aircraft, including homebuilt and specially modified production airplanes, will be participating at AirVenture 2014. They are based on aircraft that provide supplies to the rugged and far-flung outposts throughout Alaska. The demanding terrain in that state requires that aircraft take off and land on rough runways often less than 500 feet long.

During flying demonstrations at the AirVenture’s daily afternoon air show July 28-30, the Valdez STOL aircraft will stage a “fun flying” demonstration from the grass ultralight runway on Friday evening, August 1. In addition, the aircraft will be on display in special parking areas and on the main showcase ramp at Oshkosh, with pilots and builders part of forums and evening programs throughout the week.

“Most people think of airport runways of concrete a mile or more in length, but these aircraft can land on almost any flat surface – sometimes in less than 100 feet,” said Jim DiMatteo, EAA’s vice president of AirVenture features and attractions. “The necessity of creating aircraft that can serve Alaska’s remote areas also inspired a competition that’s nothing like you’ll see in the Lower 48.”