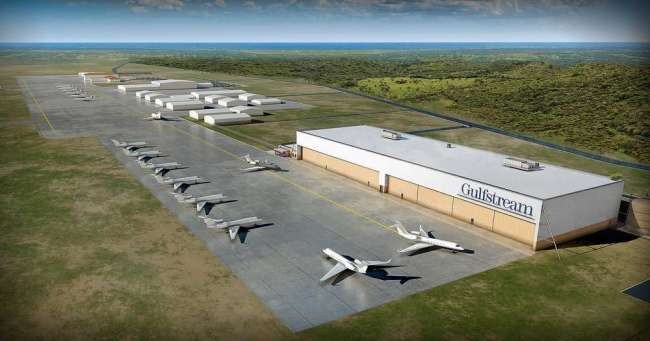 BRUNSWICK, GA. — Gulfstream Aerospace will build a $25 million facility to expand its service center at the Brunswick Golden Isles Airport in order to add 100 jobs to its workforce there, corporate officials said Monday. The company already has 200 employees in Brunswick who finish out aircraft manufactured at Gulfstream’s Savannah facility and perform maintenance on existing Gulfstream jets.

Work will begin on the 110,000-square-foot facility within the next three months and it is expected to be operational by May 2015, the company said. The building will have 73,000 square feet of hangar space, and the rest will be used for offices, back shops and parts storage, the company said. Gulfstream President Larry Flynn said the employee base could be expanded by more than 100.

“We like to under-promise and over-deliver,’’ Flynn said after the 11 a.m. announcement of the expansion. The majority of the jobs will be held by licensed technical and avionics specialists, all whom will be highly skilled, Flynn said. Some of the Brunswick work force installs seating, sound systems and other furnishings on new jets and paint them.

The annual payroll for the 175 direct employees already working in Brunswick is $13.1 million. Flynn said the majority of the new employees will be direct hires by Gulfstream and that initial hiring already is underway. 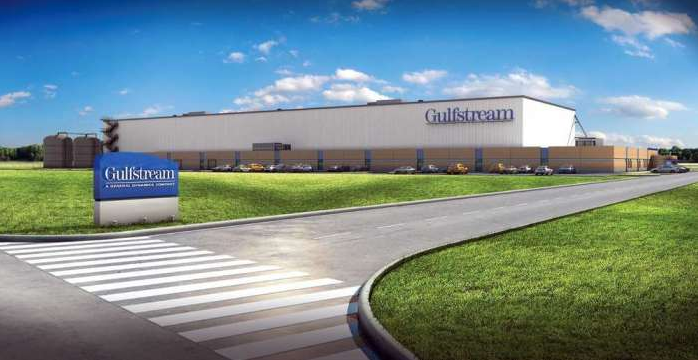 Flynn credited a 2013 law that exempts aircraft parts from sales tax in Georgia. With state Rep. Alex Atwood, R-Brunswick, as a sponsor, the bill easily passed the House in March. In speaking for the bill, Atwood displayed a photo of a jet and reminded the other House members that aircraft could easily fly to other states. Flynn said the exemption doesn’t necessarily help Gulfstream because it has facilities around the country, including other states with the exemption.

“That just helps our customers decide to come to Georgia,’’ Flynn said. “Six percent on aircraft parts is a big deal.” Flynn said Gulfstream could have decided to expand in one of the other states where it carries out similar operations. “We made the decision [to expand in Brunswick] after the abatement went into place,’’ he said.

There was not the usual mention of any property tax breaks, grants or other incentives or concessions from state or local governments. Flynn said that’s because all the $25 million will be Gulfstream money.

Robert Burr, executive director of the Glynn County Airport Commission, said the announcement is the first in what he hopes will be others at an airport that has 2,000 acres available for development.

“This is the day I say Brunswick Golden Isles spreads its wings,’’ he said. Burr, who was just hired a few months ago, said the airport commission will help existing tenants and others who want to come. “This community is ready to grow. This airport is ready to grow,’’ Burr said.

In explaining the expansion at Brunswick, Mark Burns, Gulfstream’s president of product support, said Brunswick played a “significant role” as the company set new records in its service organization worldwide.

“The growth of our fleet has increased the demand for aircraft maintenance and refurbishment,’’ Burns said. “Expanding in Brunswick keeps us well positioned to continue to provide the best customer service and product support available.”

Gov. Nathan Deal, who was originally scheduled to attend the announcement, instead said through a release it is an honor when Gulfstream and other international companies “choose to call Georgia home.”

“Our more than 20-year partnership with Gulfstream underscores its faith in our business climate and skilled workforce. This expansion will have a significant economic impact on Brunswick and Glynn County,” Deal said.