British Airways To Power Jets With Fuel Made From Garbage Waste 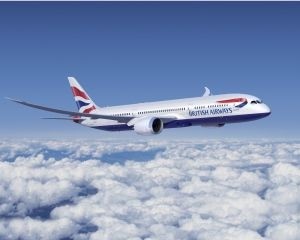 British Airways has announced plans to power its flights using sustainable jet fuel made from landfill waste — a move it says will be equal to taking 150,000 cars off the road.

In partnership with Solena Fuels, the UK’s flagship carrier says it’s committed to buying 50,000 tonnes of the sustainable jet fuel a year once the facility is completed in 2017.

To be built in Thurrock, Essex, the facility will convert 575,000 tonnes of post-recycled waste, normally destined for the landfill or for incineration, and convert it into 120,000 tonnes of clean burning liquid fuels.

The announcement comes as the aviation industry is set to meet in Geneva at the end of the month for the 2014 Global Sustainable Aviation Summit, and in time for Earth Day, April 22.

While airlines have long offered customers the option to buy carbon offsets to lessen the guilt of flying, airline travel has been considered the final bastion when it comes to sustainability, given the limitations of greening a mode of transportation powered by fossil fuels.

But British Airways joins an existing group of commercial carriers like United, KLM and Virgin Atlantic that are exploring the potential of biofuels for the future.

Last summer, United Airlines signed a deal to purchase 15 million gallons of lower-carbon, renewable jet fuel over three years with AltAir Fuels. It was also the first North American carrier to put a plane in the air powered by biofuels made with algae in 2009.

Virgin Atlantic was the first airline to operate a biofuel-powered flight in 2008.

Every year on Earth Day, our nation renews its focus on the environment and climate. This year at DOT, we’re paying special attention to how transportation decisions have different environmental impacts on different communities. For example, more frequent transit service can mean less exhaust fumes on a neighborhood street. That could lead to better health for those residents. In addition to lower medical costs, better health also means fewer days of school or work missed because of illness, and that translates to better economic opportunity down the line.