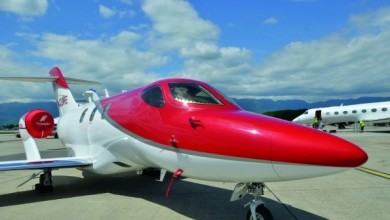 Honda Aircraft is at LABACE with its unique HondaJet, which is making its show debut. Its presence comes hot on the heels of Honda electing last month to appoint Brazil’s Líder Aviação as its exclusive dealer covering Brazil. This marks Honda’s decision to expand its sales effort to include the region for the first time.

Honda Aircraft president and CEO Michimasa Fujino said, “General aviation in Brazil has experienced impressive growth, and it is the second largest country [in the world] for new business jet sales. Expanding sales to this important market is part of our global sales plan and strategy for the HondaJet.”

Following its three-day appearance at LABACE, the HondaJet demonstrator will embark on a regional sales tour, conducted by Líder and Honda. Based in Belo Horizonte, Brazil, Líder lays claim to being Latin America’s largest private aviation business, with 23 fixed-base operators (FBOs) throughout the country.

“Líder’s demonstrated leadership in business aviation and established facilities make it a strong partner to deliver outstanding customer service,” said Fujino, who added, “We are excited to introduce the HondaJet in Brazil with a company that shares our passion to create a new and higher standard for aircraft ownership.” 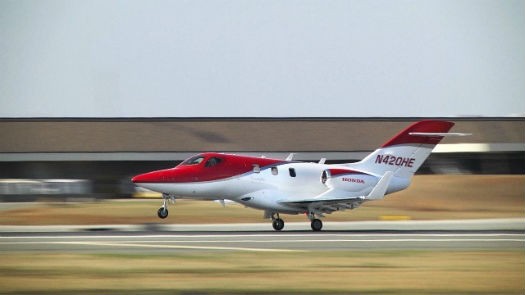 Eduardo Vaz, Líder Aviação president and CEO said, “The HondaJet incorporates advanced technologies and is an ideal aircraft for the Brazilian market. Líder and Honda Aircraft are a natural fit. We are excited to represent the world’s most advanced light jet as HondaJet Brazil.”

The light HondaJet is distinguished by its “over the wing engine mount” (OTWEM) configuration, which enables maximum cabin space for the aircraft size. Its combination of laminar-flow wing and composite fuselage is the result of decades of research and the aircraft is designed to deliver the ideal combination of speed, range, comfort and fuel efficiency in its class.

The over-wing configuration not only permits more cabin space (since there is no need for engine-support structure in the aft fuselage), but also increases efficiency (through drag reduction) and lowers noise, both inside the cabin and on the ground below.

The light twinjet is powered by a pair of GE Honda HF120 turbofans. In the cockpit, avionics are supplied by Garmin with its G3000 all-glass suite featuring three 14-inch landscape-format displays with touch-screen controllers.

Honda Aircraft is based in North Carolina with a 600,000-sq-ft research, production, administration and customer-service headquarters. It expects to start making initial HondaJet deliveries in the U.S. by the end of 2015.

This article was originally published on AINOnline.com