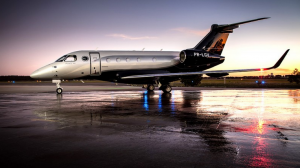 The battle is joined. The Legacy 450 now has both Brazilian ANAC and U.S. FAA type certificates. And once again, Embraer has Cessna directly in its sights as it challenges its North American competitor for another class championship title. This time, it’s the new Legacy 450 going head to head against the Citation Latitude in the entry-level super-midsize category. Embraer modestly calls the Legacy 450 a “mid light” business jet, even though it has the same fuselage cross-section as its 3,100-nm Legacy 500 super-midsize jet. Cessna says its 2,850-nm Citation Latitude is a midsize jet with the most cabin volume in class.

The 2,575-nm Brazilian entry, though, sets new and higher standards for passenger comfort, cruise speed and systems technology in this size of business aircraft. Maximum cabin width is 5 in. greater and floor width is 7 in. more generous than the Latitude’s. But cabin length is about 15 in. shorter, so the Legacy 450’s overall cabin volume, excluding its 35-cu.-ft. aft internal luggage compartment, is within 2% of its Wichita rival’s.

While the Latitude has a 275-nm range advantage, the Legacy 450 excels in many other areas. It’s the only business aircraft priced under $50 million, other than the Legacy 500, to boast fly-by-wire (FBW) flight controls. The digital system lowers pilot workload by providing flight envelope protection, thrust asymmetry compensation in the event of engine failure and maintaining a constant flight path when changes are made to thrust, speed or configuration. More importantly to passengers, FBW provides a considerably smoother ride because it damps out minor bumps, gusts and shears.

This Article originally posted on AviationWeek.com