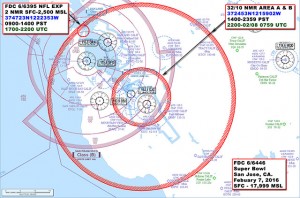 The FAA has issued a flight advisory to make pilots aware of temporary flight restrictions (TFRs) that will be in effect on Feb. 7 in connection with Super Bowl 50, which will be played at Levi’s Stadium in Santa Clara, California.

Multiple notices to airmen will be published to cover the National Football League championship game between the Carolina Panthers and the Denver Broncos. The FAA urges pilots to check frequently for changes to valid times and dimensions prior to operating in the affected areas.

This article originally posted on AOPA.org.