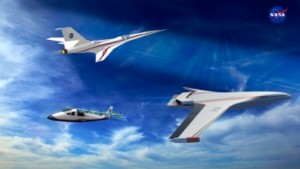 NASA aeronautics could see its biggest boost in more than a decade if a $3.7 billion plan is approved that would bring agency-matured technology to flight during the next 10 years.

The New Aviation Horizons initiative, if approved by both houses of Congress, would include demonstration and validation of new technologies to dramatically reduce fuel consumption, emissions and noise and open new markets for industry. The initiative would start with $150 million in the proposed fiscal year 2017 budget for the Aeronautics Research Mission Directorate. The aeronautics budget would then increase every year to a total of nearly $1.3 billion in 2021.

The initiative aims to develop aeronautics research for transformative capabilities to enable the U.S. aviation industry to maintain and advance its global leadership and continue the nation’s economic growth and job creation through aviation. Included in the plan are ultra-efficient aircraft such as a hybrid wing body aircraft, a hybrid electric airplane and a low-boom flight demonstrator. Multiple human-piloted demonstrators are planned in each of the categories.

“All the credit goes to Jaiwon Shin (Aeronautics Research Mission Directorate associate administrator) and his strategic planning team for putting together six strategic thrusts and having a consistent, obtainable method for getting there,” said David McBride, NASA Armstrong Flight Research Center director.

Armstrong, located on Edwards Air Force Base in California, has validated through flight a number of the concepts leading up to the plan, said McBride, who has been an advocate for demonstrator aircraft.

This article originally posted on NASA.gov.