Northrop Grumman’s B-21 Unveiled by US Air Force 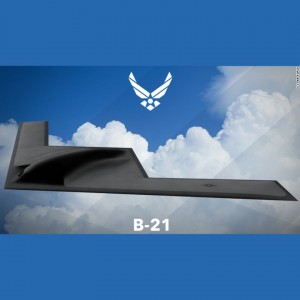 The new B-21 Long Range Strike Bomber was recently released by the U.S. Air Force!

The U.S. Air Force unveiled the first rough designs Friday of the new $80 billion Northrop Grumman Long Range Strike Bomber, giving it the designation of B-21. While unveiling the future military aircraft at the Air Warfare Symposium in Orlando, Florida, Air Force Secretary Deborah Lee called on airmen all across the country to come forward with official names for the aircraft.

“So we have an image, we have a designation, but what we don’t yet have, we don’t yet have a name,” James said, according to a Defense News report. “and this is where I’m challenging and I’m calling on every airman today … to give us your best suggestions for a name for the B-21, America’s newest bomber.”

There are currently no existing B-21 prototypes, although the aircraft does bear a striking resemblance to the old B-2 Spirit bomber that Northrop Grumman produced between 1987 and 2000. Lee explained the similarity during her speech, saying that the B-21 would share some characteristics with the B-2.

“The B-21 has been designed from the beginning based on a set of requirements that allows the use of existing and mature technology,” James said, referring to the Air Force’s old stealth bomber that will remain in service until 2058.

This article originally posted on IBTimes.com.