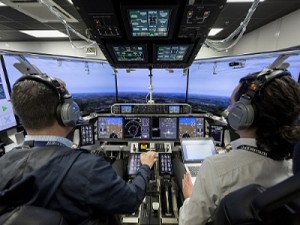 Gulfstream Aerospace Corp. has announced that the Gulfstream G600 iron bird recently completed its “first flight,” demonstrating the company’s continued commitment to research and development and the growing maturity of the G600 aircraft program.

A spatially correct, dimensionally accurate structure that includes a flight deck, the iron bird allows engineers to test the flight control and mechanical systems, including landing gear, brakes and hydraulics in a ground-based lab.

During the 30-minute flight, the G600 iron bird simulated taxi, takeoff and landing as well as maneuvers and transitions at altitude and airspeed.

“This first flight sets in motion the testing and validation required for the G600’s actual first flight,” said Dan Nale, senior vice president, Programs, Engineering and Test, Gulfstream. “With the iron bird, we can confirm the characteristics of the system components, improve the integration maturity, make modifications and provide those benefits in a lab environment, all while on the ground and still in the design stage to the benefit of the flight-test aircraft. Having this resource enhances safety and streamlines the testing process.”

Similar to the G650 and G650ER, the G600 offers a full three-axis digital fly-by-wire system with benefits that include flight-envelope protection, stability augmentation, increased redundancy and reduced maintenance.

The first G600 flight-test aircraft and structural test article are in production. The aircraft is scheduled to enter service in 2019.

This article originally posted on PRNewswire.com.