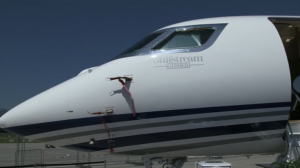 Gulfstream Aerospace has handed over a G650ER to MSFL, marking the first factory-direct delivery of the ultra-long-range jet in mainland China. MSFL’s aircraft is U.S. registered, since Chinese CAAC type approval of the G650/G650ER is still pending.

According to Gulfstream president Mark Burns, “This delivery highlights the continued need for long-range business jet travel in China, the role MSFL has played in expanding Gulfstream’s presence in the region and the continued strong performance of the G650ER.”

With a range of 7,500 nm/13,890 km at Mach 0.85, the G650ER can fly from Beijing to Dallas or from Shanghai to New York nonstop. Gulfstream continues to enhance the aircraft, adding autobraking late last year.

MSFL was formed in April 2008 and took delivery of its first Gulfstream, a G450, in June 2010. Today, it is the largest business jet owner in Asia, operating 64 Gulfstreams in support of the company’s aircraft leasing operation. In total, there are 166 Gulfstreams based in greater China.