Still Flying Commercial? Now is the Time to Sign up for TSA Precheck 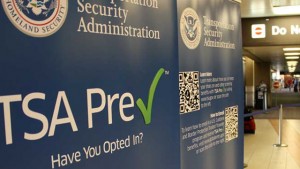 If you’ve been on the fence about enrolling in the expedited airport screening program called TSA PreCheck, it’s time to get with the program. Read more below on how you can enroll into the TSA PreCheck Program.

Airport security lines are shaping up to be especially long during the peak summer travel season — largely because not enough people have applied for the Transportation Security Administration program that funnels “trusted travelers” and accompanying family members under 13 into faster, less rigorous screening lanes at more than 150 U.S. airports.

It costs $85 to apply, but PreCheck membership lasts for five years. You’ll also need to get to a local enrollment center for an in-person interview and fingerprinting. While the process is a bit of an inconvenience, that’s nothing compared with the stress of worrying about your flight going wheels up while you wither in an interminable security line. Apply online at tsa.gov/tsa-precheck.

And here’s a handy PreCheck Q&A from The Associated Press:

Q: What is PreCheck?

A: The program allows previously vetted fliers to use special lanes at the checkpoint. Shoes, belts and light jackets stay on. Laptops and liquids stay in bags. And these fliers go through standard metal detectors rather than the explosive-detecting full-body scanners most pass through.

Q: How do fliers join?

A: Travelers get PreCheck if they are a member of one of the Customs and Border Protection’s expedited entry programs — Global Entry, Nexus and Sentri — or by joining directly with the TSA. Membership in these programs ranges from $50 to $100 for five years and requires an in-person interview, typically at an airport. Those without a passport can just get PreCheck for $85.

Q: How do the airlines know who is a member?

A: Once approved, travelers get a “known traveler number.” If they enter that in frequent flier programs or while making a reservation online, the airline knows of their PreCheck qualification. Then, when a boarding pass is generated a check is made with the TSA and usually PreCheck is granted and added to the document.

Q: Is it good on all airlines?

This article originally posted to Aviationpros.com.