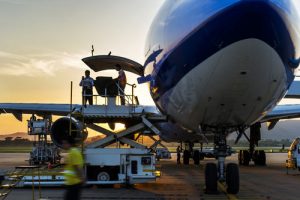 Read more, below about Textron’s improvement in deliveries.

After some “rough sledding” in the first two months of 2016, Wichita-based Textron Aviation turned in a modestly improved first quarter. The manufacturer of Cessna Citation business jets and Beechcraft King Air turboprops posted a $73 million profit in the quarter, up $6 million from a first-quarter 2015 profit of $67 million. It also delivered one more jet and one more King Air than in the same period a year ago: 34 jets and 26 King Air turboprops in first quarter 2016 compared with 33 jets and 25 King Airs in first quarter 2015. That was despite a tough start to the year in sales, Textron Inc. chief executive Scott Donnelly told financial analysts in a conference call Wednesday morning.

“If we look at the first quarter, there’s no doubt that January and February were pretty rough sledding,” Donnelly said. “But as we went in through March and I’d say continuing now in April, the market has been pretty good. “The momentum we felt in the latter part of last year certainly took a pause.” Textron, the Providence, R.I.-based parent company of Textron Aviation, said it earned $150 million on $3.2 billion in revenue in the first quarter of 2016. That compared with $128 million in earnings on $3 billion in revenue in the same period a year ago. Donnelly “blamed turmoil in the market and general sentiment” for a slowdown in demand in the first two months of 2016. But, he emphasized, that reversed beginning in March, and activity has “returned to a pretty decent market.” Donnelly estimated for the quarter that 80 percent of jet deliveries were in the U.S., while King Air deliveries were evenly split between North America and international customers.

“We’re starting to see some momentum … a little bit in Europe, so I think we’ll start to see some jet deliveries pick up there,” he said. Of the business jets Textron Aviation delivered in the three-month period ending March 31, seven were the midsize Citation Latitude, the company’s newest jet. Textron Aviation’s backlog stood at $1 billion, down $47 million from the fourth quarter of 2015. Donnelly also noted that the Citation Longitude, a super-midsize jet that will be Cessna’s biggest jet yet, is expected to make its first flight early this summer.He and Frank Connor, Textron’s chief financial officer, reiterated to financial analysts that their expectations for the year have not changed. They continue to expect overall growth in revenue and earnings.